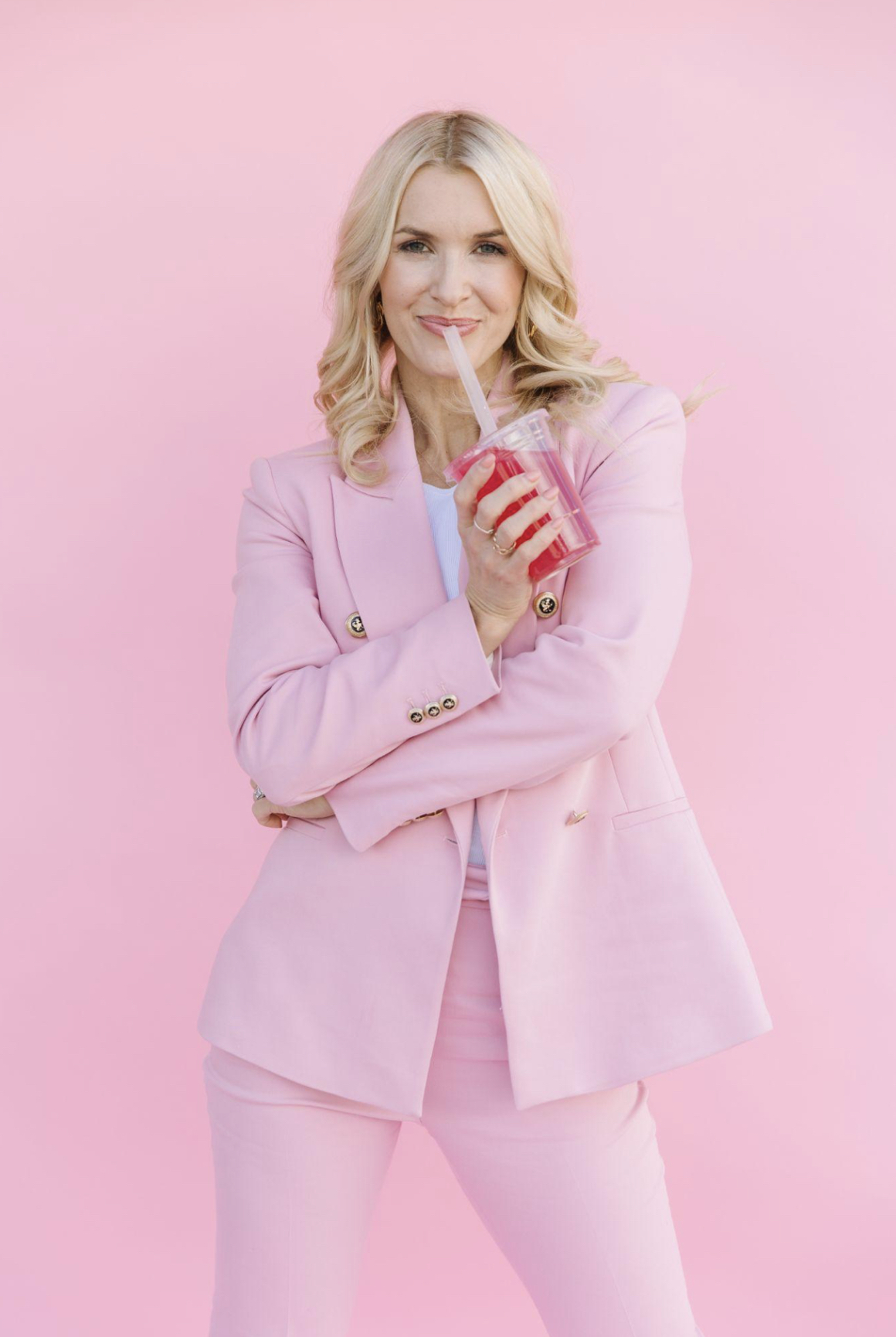 The loud and proud wellness powerhouse, Mixhers, was founded on the basis of necessity and self-recovery. For Jess Toolson, co-founder and leading lady in transformative health, building the Mixhers empire was like learning a new dance routine, the steps and stages becoming more familiar with every grind. The company deals in clean, holistic drink supplements targeting women and their menstrual cycles, and, like Toolson, many women were left in the dark about supportive strategies to navigate their hormones. With Mixhers now standing as the driving force behind dynamic hormonal health, Toolson has positioned herself as the new team captain, tasked with teaching women all over the world the steps to keeping their cycles in sync and on rhythm.

Growing up in Provo, Utah, Toolson was active in dance competitions and eventually entered the choreography circuits. Much of her adolescence was shaped by a contagious hustle to work hard and play harder, sculpting her into the vibrant force that she is today. Of course, it wasn’t always so, and Toolson found herself thrown into a kaleidoscope after giving birth to twins while living with her husband overseas. The arrival of the Toolson twins offset her menstrual cycles immensely, introducing a new batch of postpartum period cramps. With aggressive postpartum periods came the onslaught of cystic acne, something Toolson had never encountered before in her youth. This potent combination pushed Toolson into a corner, where she remained for several years trying to understand how and why these symptoms came to be.

​“I was always such an outgoing person, and those postpartum periods really affected my personality,” Toolson recalled. “I started hiding behind my hair, rarely looking people in the eye, it was very unusual behavior for me.”

​That’s when she knew something needed to change. The pain from deeply-rooted acne was typically followed by excruciating pain from her periods, and Toolson simply couldn’t catch a break. The unspoken reality of hormonal health is that it correlates with our confidence and the ways we move through the world. Sustaining long-term blows from postpartum periods like cystic acne or caustic cramps can develop permanent damage to the psyche, because if we’re always feeling the weight of consequential cycles it can start to pull us further to the ground. Picking yourself up is no easy task, especially without a helping hand.

​“I was going to the gym and working out with a full face of makeup,” said Toolson. “It was so silly, but I just completely lost my confidence.”

​It was at her gym that Toolson had the right conversation with the right person. Cody Sanders, a close friend, offered an ear when Toolson needed to vent after a session. It wasn’t clear at the time, but showing vulnerability in front of Sanders marked the early discussions that spoke Mixhers into existence, with Sanders eventually uniting with Toolson to co-found the brand together.

​“I broke down in front of Cody and just really opened up about everything,” said Toolson. “She was the one who suggested a real shift in my health approach.”

​Sanders is a holistic health practitioner and had been experimenting with a homemade solution at home that tackled hormonal health. The tribulations of Toolson’s personal struggle seemed like a perfect candidate for the mixture, as Sanders had been offering this creation to a few other women as well and knew it could work wonders. It is becoming more apparent to our societies that optimal health begins in the gut, and what we put in our bodies is what ultimately dictates the way we feel and look on the outside.

​“Cody recommended I keep up with this formula for at least three months because, obviously, change doesn’t happen overnight,” said Toolson. “Within the first month of this new health system, I had already noticed my periods were shorter. By the second month, my skin was clearing up.”

​The homegrown concoction was proving to be wildly successful for Toolson, who had all but considered changing her home remedies in her fight to combat postpartum periods. When she gave birth to twins, Toolson had enlisted the help of countless doctors who inevitably gave her prescriptions and a slew of misguided directions that didn’t yield strong results. For a long time Toolson had so many questions with little to no answers. With the help of a friend, things were starting to make a lot more sense.

“A lightbulb went off, and I realized I had found myself again,” said Toolson. “I felt like the old Jess again.”

With this new discovery, Toolson and Sanders began the floorwork for what would eventually become Mixhers, driven by Toolson’s tenacity as a dancer and a mother’s regard for a good challenge and Sander’s background in holistic nutrition. The brand officially went public in the middle of 2020, and as of 2022 the core team has grown from being just Toolson and Sanders to 22 employees. What Mixhers has created, however, reaches far beyond the numbers. At its core, Mixhers is a community of both men and women who are actively correcting the narratives surrounding women’s health, designing a world that’s more inclusive and educated on topics like menstrual cycles, postpartum periods, and, yes, sex drive. The flagship product, “Hertime”, is the face of Mixhers and represents the bulk of the company’s offerings. All of their mixtures are crafted with natural ingredients that target pressure points in our bodies and support healthy lifestyles with things like white peony, pomegranate, Chinese licorice root, and other botanicals.

Toolson harnessed the strength of her background in movement and physical fitness to overcome her personal journey and report back with unrivaled results.

“I’ve had so many conversations with women who feel the way I used to feel, but no one had the solution,” said Toolson. “They would always say ‘as soon as you find a solution let me know’”

The secrets of the earth have surfaced and revealed a bounty of solutions to some of our most pressing hurdles in hormonal health, and Mixhers strives to marquee the answers to those same questions that Toolson was asking at the beginning of her journey. In just a few short years, Mixhers has blossomed into an iconic movement in supporting women’s health, but the journey is far from over.

As a result of her postpartum periods, Toolson attributes much of her growth as an individual to the days that followed, dark as they may have seemed. Sure, her reputation has been colored by the success of Mixhers and her influential power as a woman in business, but Toolson is a mother first and foremost.

“I learned a lot of my life skills and what being an adult means through becoming a Mom,” said Toolson. “I’m trying to lead my daughters by example, and teach my son to be respectful to people who don’t have control over certain things. As parents we’re just trying…just doing our best.”

Toolson continues to whisk her standard of wellness into her children’s routines, ensuring that they feel complete after eating and understanding the importance of building muscle. Determined and strong-willed, Toolson’s love for the game and instinctual craving for a challenge help keep Mixhers on its toes, always striving to level up where necessary. Presently, Mixhers remains a direct-to-consumer model, with eyes set on rolling into retail spaces in the near future. Larger markets would appeal to a much larger audience, reaching women all over the world and showing them what happens when you learn to stop and listen to your body, second to none. Additionally, Mixhers works closely with The Period Project, a Utah-based movement fighting to end period poverty and supply the nation’s bathrooms with critical hygienic needs for women and girls. Many of these topics (and juicier ones, like libido) are openly discussed on “It’s Hertime”, a podcast co-hosted by Toolson and Sanders as they dissect the tender subjects surrounding women’s health we so often neglect to expose. The show enjoys a post in the top 2% of podcasts and frequently features honorary guest speakers.

Mixhers is a lifestyle, and something that Toolson has pioneered in a very personal manner that shines through each product listing. Major chapters in our lives often come with a metamorphosis, whether we want it or not. Toolson began her adventure with Mixhers during the peak of her own transformation, and through these experiences she brings a fresh perspective for all women seeking to better understand themselves and their bodies. Together we’re better, and Mixhers is leading a renaissance in hormonal health that will add wings to progressive societies hungry for real change and real nutrition.